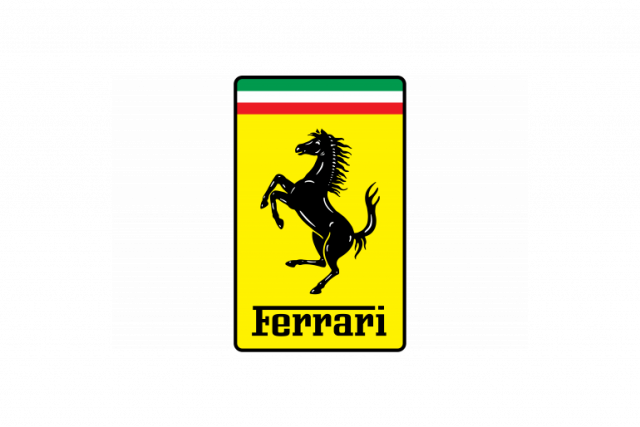 Ferrari is a luxury sports car launched by Enzo Ferrari in 1939 in Maranello, Italy. A yellow framed symbol with a black dancing horse leads the brand. The design of the Ferrari logo came from Count Francesco Baracca. He was an Italian pilot of the air force during World War 1.

This Ferrari logo took motivation from Italian national colors and an airplane. The top of the logo shield had yellow, white, red, and black shades. SF – letters were at the base of the logo, which stood for Scuderia Ferrari.

Ferrari is an Italian locomotive manufacturer in the Formula One World Championship. It is also involved in high-performance racing supercars, cars, and luxury sports cars. The company built its first car in 1940. 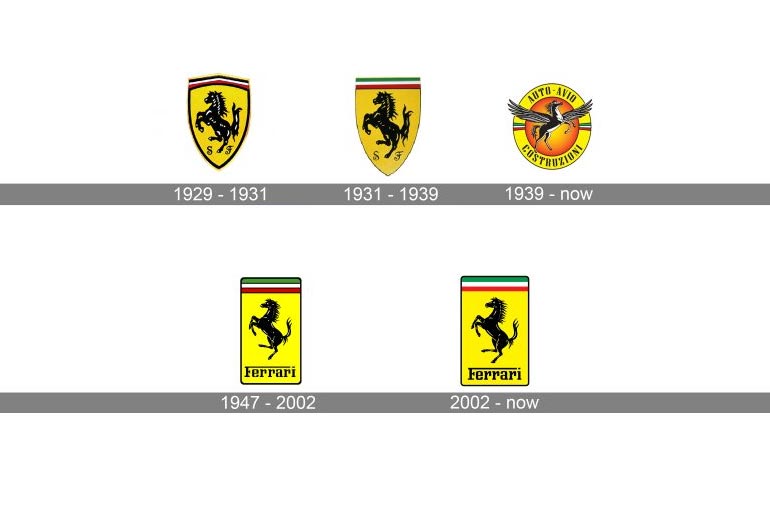 The sign’s yellow background signifies the color of the Italian city Modena, Italy, where Enzo was born. In 1923, Modena met the parents of Baracca. The mother of Baracca told Ferrari to paint the prancing horse on his cars because this sign would give him good luck. So Ferrari did the same and added the splash of yellow.

The original symbol of the Ferrari cars appeared as a yellow shield with a black outline in 1929. This logo consists of solar protection with a black horse on the right side, and there are two letters, “S” and “F,” on the left side.

These letters are written in thin italic font in uppercase and decoded as “Scuderia Ferrari.” There are three strips at the top of the logo in the color of the Italian flag. The top of the shield had yellow, red, black, and white colors.

The first update in the logo brought a few changes. After two years of using the original Ferrari Logo, the company approved the Italian national flag’s green, red, and white color pattern. The company redesigned the curved top logo horizontal.

The designer of the Ferrari logo also gave a thick black outline and added a yellow shade to the black horse. That iconic black horse on this logo was also changed and turned to the right of the logo. That beautiful animal had two graceful extensive wings behind its back.

This logo was used first time in 1932 on the cars participating in the Spa Grand Prix race. It has always gone with branded products, and it had manually approved as the core symbol of Ferrari. 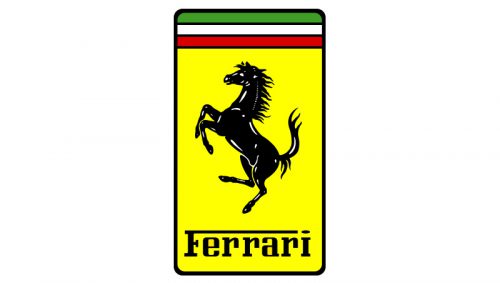 In 1947, the rectangle logo replaced the shield icon by the brand. The graceful dancing black horse became silky and sharper on a solid yellow background. A vertically located rectangle changes the shield with its angles rounded.

The letter “F” extended to meet the flattened spot of the letter – i. The designer replaced the “SF” letters with the “Ferrari” logotype in black color. The logo has green, red, and white on the top of the horse, and a thin black line parted these color palettes. 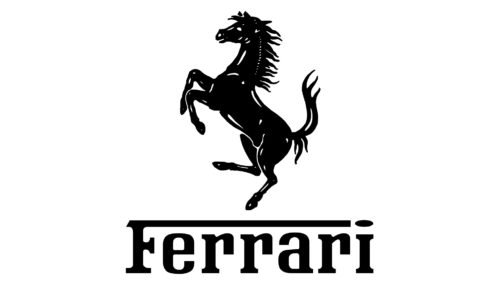 In 2002, the Ferrari logo’s design did not change much. That is the second most crucial period in the history of the brand. The contours became a little cleaner, and the only noticeable change to make to the flag.

The current logo of Ferrari looks the same as the final design of Ferrari. The most deceptive change is removing the thin black lines that distinguish the three colors at the top of the symbol. A serious look at the letter “I” shows the designer warned the font. The updates make the Ferrari logo elegant and classy. 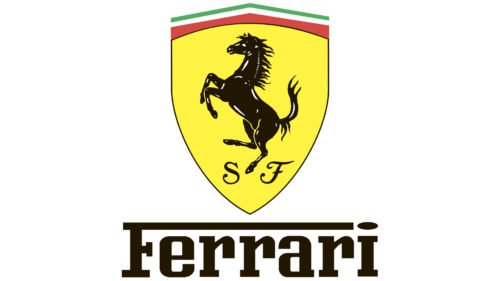 A prancing horse symbolizes an Italian luxury sports car that has got up on its hind legs. This position of the graceful horse also signifies power and victory. The Ferrari symbol is one of the best logos in the automobile industry.

With a yellow frame and a majesty black horse, the Ferrari logo is top of the competition.

The font has changed by the history of the brand of Ferrari. The lines of the symbol became more beautiful and elegant. The main gamut of Ferrari is black and gold. The Black and yellow colors are always present on the company logo and never disappear.

The dark shape of a horse looks very impressive on an opposing light background. The national colors of Italy are permanent and placed at the top of the symbol. The font of the Ferrari logo conveys the power, beauty, and leading position of the automobile brand in the industry market.

The Ferrari logo has five colors, two neutral hues, and three bright colors. The designer of the Ferrari Company has used these colors Palettes in the most artistic and visually appealing style.

The yellow color was the original color chosen by Enzo Ferrari. Hence, the yellow background makes a dark horse stand out more successfully and occupies a large part of the Ferrari’s logo design.

Black is a mysterious color that paints the graceful horse by the Ferrari’s logo design. Black color has exuded some emotions that are strength, power, and authority.

The green color of the Ferrari’s symbol shows the sign of health that promotes hope, kindness, and harmony. The green color also aligns with freshness, healing, and rebirth.

The color of blood (red) is the second most popular color in the symbol of Ferrari. It is the last color strip on the Ferrari’s logo design which promotes passions, energy, and actions. The red color also signifies love, self-discipline, and desire.

The white color of the logo promotes purity, perfection, and innocence. It comes after the green in the logo that is often related to good things.

Today, Ferrari is the world’s favorite and most powerful brand and associated with prosperity and success. Ferrari and its logo are associated with a feeling you experience at an incredible speed and with sports cars.

The symbol of a reared horse is exactly known all over the world. The Ferrari logo has several updates, yet its main graphic features since 1929 endure intact.