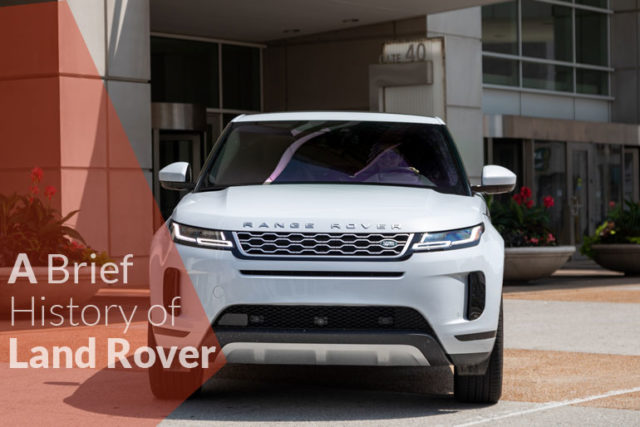 Land Rover is a vehicle manufacturer that has become synonymous and a household name as a representative of the British motoring industry & Britain itself. This definitely wouldn’t be the case without a rich history which is certainly true with the Land Rover brand. This distinctive British manufacturer has paved the way for other manufacturers in the European market and beyond over the years.

We have also seen this reflected by the fact that we have numerous clients who are looking for a Land Rover lease or to lease a new Land Rover.

We have written a brief history of Land Rover starting from the beginning of production of the vehicle to the establishment of the company and the fleet of vehicles that followed after its creation. If you are interested in the history of Land Rover or want to find out more about the various models that have been manufactured and the evolution to the vehicles that are available today then read on!

After this – the manufacturer went from strength to strength, creating the famous Land Rover vehicles that are known and loved today. The Freelander was officially launched in 1997 after much-needed funding was provided by BMW (who took over the Rover group in 1994) as the Rover Group had a tight budget. This saw the Freelander quickly become the best selling 4-wheel drive vehicle in Europe and with 2 generations of highly successful vehicles – the Land Rover Discovery Sport would replace the Freelander in 2005.

The Land Rover Discovery, on the other hand, was first launched in 1989 aimed to rival the Japanese SUV market leaders. The aim of this was to hit the market at lower prices to increase market share for this model. The second Discovery range was released in 1994 which was also sold in the US marketplace (due to increased demand for the vehicle being available in the US.)

In the modern-day, Land Rover vehicles are highly fashionable and in high demand around the world. As well as offering petrol and diesel vehicles, developments have been made to enter the electric vehicle market in 2021. The Range Rover Velar is also a range that has seen international renown and sales for the company. The integration with Jaguar allows Jaguar Land Rover to integrate and cross implement technologies to develop exciting new concepts such as their electric vehicles.

Why Choose a Land Rover Vehicle?

Land Rover has built a strong reputation over the years creating highly distinctive and technically advanced vehicles. Providing the highest level of safety for all occupants – the company is making more and more conscious efforts to increase the environmental friendliness & sustainability of their vehicles when in production and on the road.

Being Jaguar Land Rover – there is also an intricate range of Jaguar vehicles available which also reflects the mantra of Land Rover. With a rich history and distinctive design styles, a Land Rover vehicle is the perfect choice for those who are looking for an SUV. Whether you are looking to purchase your first SUV or are a seasoned SUV user – there is a vehicle in the arsenal that is perfectly suited to your requirements and needs.

Alexander Fox works for Intelligent Vehicle Finance who is one of the leading providers of business and personal van & car leases in the UK.

How to Sell Your Used Car in Britain