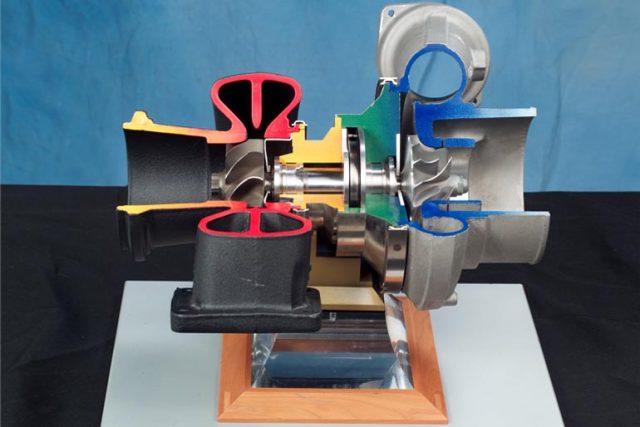 A well-known quote we all heard is the Necessity is the mother of invention. Nothing is a perfect invention; one can always make something better, more efficient, and cheaper. A vehicle’s engine is one of the remarkable machines powered by a liquid and provides you many times faster speed.

There is always a space to build an engine that will be faster and consumes less fuel. Here is a device fitted to a vehicle’s engine that will boost fuel efficiency and power in a vehicle to make your thought possible. This component is called Turbocharger.

What is a Turbocharger?

A turbocharger is a device composed of a turbine and air compressor used to harness that waste power somehow emitted from the engine to make the vehicle go faster. How does a turbo achieve this extra efficiency and power inside your engine?

Car engines produce power by burning fuel in cylinders. Air enters and mixes with fuel and burns to make a small explosion that drives the shafts and gears that moves the car. It pushes the waste air and fuel mixture out as exhaust.

You have to add more cylinders to make a car faster. Despite that, a cheaper option is to use a turbocharger, which forces more air into the engine and used its exhaust to work.

How Do They Work?

Just like Jet Engine, Turbochargers work with the same principle. A jet engine sucks cold air at the front and pushes it into the chamber, where it burns with fuel as a blast of hot air out of the back. It drives a turbine that drives the compressor at the front of the engine.

The Turbocharger plays the same rule to the car’s engine. A turbocharger is based on two halves joined together by a shaft with a turbine wheel on one end and the compressor wheel on the other.

Housing covers these with an inlet port, in which waste exhaust gas enters at high pressure. As a result, the turbine spins, and the compressor turns. The compressor draws a vast quantity of air compressed and passed out of the outlet port. This compressed air feeds back to the cylinders.

A problem arises if you compress a gas, you make it hotter. Hotter air is less dense and less effective at helping fuel to burn. So should be cooled the air coming from the compressor before it entered the cylinders. A heat exchanger or an intercooler is involved that removes the extra heat.

As Turbo runs up to 250,000 RPM, they should have a cooling system that doesn’t run too hot. A valve called the “wastegate” is also used to divert excess gas away when the engine produces too much boost to prevent damage to the turbine.

The conventional engines differ from Turbo as they rely on the natural air pressure to draw air into the engine. That’s why a turbocharged vehicle can produce more power.

Where Does The Extra Power Come From?

Turbo engine has more power than the conventional engine raised the question of where the extra power comes from. Some time confuses the people.

Whit turbocharger, we gathered the energy from the exhaust to drive the compressor. It injects extra air into the engine and allows burning more fuel per second. Here is the extra power comes from.

Turbo is not directly connected to the car’s crankshaft or wheels. So it is not directly adding driving power to the car. It simply enabled the same engine to burn fuel at a faster rate, making it more powerful.

How Much Extra Power Can You Get?

Eventually, there is a limit as cylinders are only a limit so much they can burn fuel. There is also a limit of air you can force into cylinders through an inlet of a specific size. In other words, there are limiting factors that bound your Turbo to enhance its power.

Who Invented The Turbocharger?

The first Turbocharger was developed in the late 19th century by a German engineer. He developed the Turbocharger before World War 1 and patented it in 1905 in Germany. He continued to work on improved designs until his death four decades later.

What Are the Benefits of Turbocharger?

Turbochargers have a lot of benefits. That’s the reason why they are now so prevalent in modern cars. Here are some main plus points of a turbocharged engine.

The fundamental advantage of using a turbocharger is that Turbo produces more power in the same-sized engine. (Every single stroke of the piston generates more power in every single cylinder than in naturally-aspirated engines.).

Turbochargers are designed to produce more power output than conventional engines. Manufacturers often now get away with fitting a much smaller engine to the same car, a turbocharged four-cylinder engine instead of a V6. Turbocharged cars are improved in fuel economy and reducing emission.

They almost save up to 10 percent of your fuel as they burn fuel with more oxygen. They can burn it more thoroughly and cleanly, producing less air pollution. For example, Ford decided to replace its standard 1.6L petrol engine with a 1L turbocharged unit called EcoBoost.

Turbochargers produce more torque even on the smallest engine. It benefits the car’s solid and nippy performance. The engine feels more refined at heifer speed on a long route. At low speed around the town, turbocharged engines outpace the cars with more extensive, naturally-aspirated engines. The reason is its torque.

It’s the most unexpected benefit of the turbocharged engine. As in a turbocharged engine, the air is filtered through more components and pips. The intake and exhaust noise are refined and reduced, which makes the engine smooth and quiet.

What are the Downsides of Turbocharger?

They do have some pitfalls even though Turbo is becoming more prevalent; some are listed below.

Under your car’s bonnet, turbochargers can add complexity to other components and can develop faults. That will be too much expensive to put right.

Turbo lag happens when a car is being driven fast. You can improve by adding an extra Turbocharger in different geometry instead of one.

To achieve claimed efficiency of turbocharged engine require careful drive as the accelerator isn’t pressed too hard. The driver of a naturally-aspirated car should adjust their driving style to maintain good efficiency from a turbocharged car.

A turbocharger is one of the best inventions in the automobile industry. It is a cheaper way to improve the speed of a vehicle. Every invention has its plus and minus. Some critics say that there are better ways to save fuel, just like hybrids, diesel, and other advanced technologies. Turbochargers add another layer of mechanical complexity to an ordinary engine.