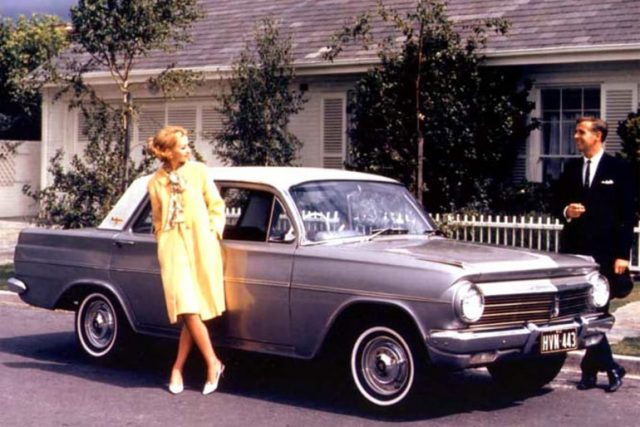 With the Ford Falcon dominating sales in the early 1960s, Holden was forced to go back to the drawing board. Their goal was to offer consumers a mix of style and power at a competitive price compared to the competition. The launch of the Holden EH in 1963 marked the turning point for Holden. With more than 250 000 vehicles sold in the next two years, what was behind the success of the EH Holden 1963?

The EH Holden and the facelift behind its success

Compared to Holden’s previous siblings, the new styling of the 1963 EH model gave it a more substantial edge. Most of the impact came from the revised roofline, but the contemporary styling added refreshing effects to the entire vehicle, viewed from all angles. Style, power, what about price?

It’s undeniably the price of the EH that made it such a winner with the public. Price tags ranged from $2367 up to $2591 for the Holden 179 automatic Special wagon. But this isn’t the complete picture. Chrysler’s Valiants were also in huge demand at the time, and with frustrating waiting lists, consumers compromised and invested in the Holden. With similar performance and ability, they were willing to make the brand switch, which was fortunate for Holden whose strategy paid off.

Another factor that boosted the popularity of the EH Holden in 1963 was the engine that used hydraulic valve lifters. This ‘red’ engine, which featured an oversquare design and a seven-bearing crankshaft, got the market excited. Other features that impacted the launch’s success were the external oil pump and oil filter, which were widely lauded for making vehicle maintenance more straightforward. The red engine would form part of the Holden offering for the next two decades.

Motorsport: the EH makes its debut

From a historical perspective, looking back at Holden dealers Bill Patterson and Bib Stillwell’s marketing finesse, the duo were undeniably masters behind the magic of the EH. The pair concluded that the Armstrong 500 in 1964 was a suitable event to show the world what he EH Holden could do.

The engine would need some modifications, but they agreed on a 179 cu. in. engine. An effort was put into improving the breathing and exhaust. Other tweaks were put in place to make it race-ready for motorsport. These included changes to the EH Holden:

Whether or not the EH 179M was primarily developed to measure the popularity of an emerging market called ‘pseudo-racers’ that Patterson and Stillwell had their eye on, the result was a market response that proved demand. A designated EH 225 M-S.4 (with 179 cu. in. engine) was launched to meet the market.

A Limited-edition Sports Version: the S4

Collectors clambered for the S4 (EH 225 M-S.4) primarily because only 120 were produced. Rarity aside, it didn’t differ much from the  EH 225 M. The significant differences were that the S4 featured a rear axle ratio of 3.55:1 and a PBR servo brake unit. Other tweaks included:

The code-named ‘S22’ project was developed for a secret model run. It included five prototypes. They pitched the idea of a model run of 100 vehicles, enough to make it eligible to compete in the Armstrong 500 in 1964. Sadly this competition car was ultimately not released. With a new engine that could develop 135 bhp, reaching a top speed of 110 mph, it’s a pity that these slick speedsters never saw the light of day.

The S5 was made with a tiny limit of ten prototypes. It’s unlikely that it was only built to test production facilities, as explained, but the objective was really for the dealers to enter the racing S5 in the Armstrong. They never saw the race track, but all was not lost: the cars formed the basis of the 179 manual Holden, which was to come later.

When Bathurst rolled around in 1964, it was clear that they had missed an opportunity for the S4, which would have won if it had made an appearance. Its acceleration and speed would have trumped the Cortina GT on the racetrack.

How To Choose A Qualified Car Mechanic To Provide Top Quality...