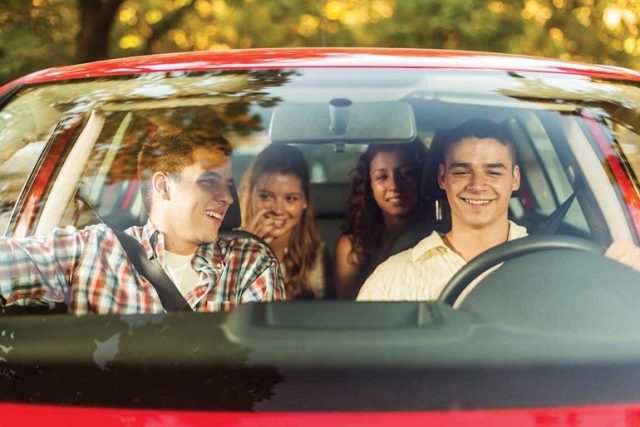 Teenagers are eager to get their licenses and drive around with their friends. However, they need to be careful, whether driving alone or with others. There have been many news stories about tragedies occurring when teens have driven with other teens in the car. Sometimes, the consequences are deadly.

There’s a good reason why states have laws restricting how many passengers a teen can have in their car at a time. It’s important for your teen to follow state laws, as well as any other road rules. Every time, they get into a car, they need to remember that driving is a privilege, not a right.

Are Teens More Dangerous Behind the Wheel?

Teenage drivers between 16 and 19 have triple the chance of getting in a deadly accident than those 20 and older. This doesn’t mean that all teens are inherently dangerous drivers. However, there’s plenty of reasons to understand why teens are involved in more accidents.

One of the biggest reasons is experience. Teens might have been given a license for performing certain driving skills effectively, but that doesn’t mean they’re ready for everything. A teen trying to merge into interstate traffic could get into an accident for not knowing about the need to increase speed while merging.

Teen drivers are also more immature than other drivers. The freedom of having their license can cause teens to feel like they’re invincible. Without any direct consequences of dangerous driving known to them, they might think the rules don’t apply to them. Showing them driver’s ed videos about reckless behavior on the road can help, but some are unfortunately bound to just brush it off.

The hope is that only responsible teens will go for their licenses and that they’ll follow the rules whenever they’re behind the wheel. However, some may get their licenses by passing the test and then proceed to drive dangerously. It could take something as severe as an accident to set them straight.

Why Do Teen Passengers Make a Difference?

Teens are already the most dangerous drivers, but adding more teens to the mix can cause even more trouble. Since teens are new drivers, they need to be able to focus on their technique without distraction. That’s much harder to accomplish when there are passengers in the car, especially other teens.

Your teen’s friends might not mean to be a distraction. However, their presence can be a dangerous one. Something as simple as conversation or putting on music could break their focus.

Other friends could be a bad influence, using peer pressure to promote dangerous driving. Drivers are ultimately responsible for their actions, but that doesn’t mean others can’t have an effect. Your teen should never try to impress anyone with dangerous driving, nor should they be led to believe that reckless driving is okay under any circumstances.

Your teen received their license under the provision that they will follow the rules of the road. This isn’t something the law is going to be generous about, and neither should you. Let your teen know there will be consequences for driving with more than the allowed number of passengers.

Having a license is more than just having permission to drive with fewer restrictions than before. It’s a message that someone has been deemed responsible enough to handle a very-demanding duty. Sadly, with the number of accidents and road fatalities each year, not enough people are taking that duty seriously.

Talk to your teen about why they need to be careful when driving, especially with other teens in the car. Much can go wrong when you’re not being careful behind the wheel. If your teen was involved in a car accident, you may need help pursuing a personal injury case. You may be eligible to receive compensation for medical care, physical therapy, as well as physical and mental suffering (source: https://www.theparrishlawfirm.com/manassas-personal-injury-lawyer/).