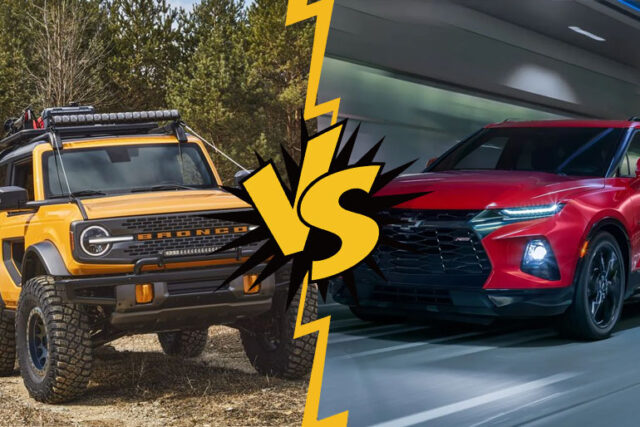 The Ford Bronco is poised to return this summer. The Chevy Blazer made its debut with a 2020 model last year. Will the old rivalry between these two start up again? A quick comparison of the two is definitely in order.

The 2021 Chevy Blazer has a sporty look. The accessory list includes a few fun items such as checkered flag body decals. Yet that’s where it stops. Blazers are basically like any other SUV today. The style really isn’t that different.

2021 Ford Broncos, on the other hand, are much more distinctive. They are open-air vehicles, thanks to a removable roof and doors. The look is square as well as sporty. If it can be mistaken for anything, it may be a Wrangler, but only if you don’t focus on it long enough to see the Ford design cues and the cool Bronco badging.

There are plenty of skid plates on the Bronco base model, and higher editions add more off-roading equipment. More imposing due to their height, Broncos have a much higher ground clearance than the Blazer.

Blazers come in five trims that follow the traditional pattern of building upon one another. Ford Broncos offer a more lateral move to those who want to personalize their ride’s looks and also what it can do. So, although it has the same number of trims, the approach is really different.

The Blazer offers an all-wheel drive capability. If you step up to this, the system is described by Chevrolet as a low-traction system for rain, sleet, and snow. The commercials show it driving along the beach or parking on a mountain in the dirt, but it actually isn’t suitable for true off-roading even in its best equipped form.

Every Bronco is an off-roader. Four-wheel drive is standard, and Ford’s GOAT terrain management system gets more interesting as you climb the trim ladder. The Big Bend, according to Ford, is for mainstream off-roading. Adventure off-roading is assigned to the Black Diamond trim. The Badlands, as the name implies, is for extreme off-roading.

You won’t find Bilstein shocks or front and rear locking differentials on the Blazer. That’s strictly for the Broncos. Likewise, if you are looking for those fun 33- or 35-inch all terrain tires, Ford Broncos are the only choice. Clearly, the Bronco took many cues from Ford trucks, including the use of the brand’s dynamic ten-speed automatic.

In conclusion, the Blazer simply isn’t the Bronco’s equal. Those shopping for an off-roader should be fooled by the Blazer name or its advertising. There’s nothing wrong with the SUV, but it isn’t competition for the Ford Bronco. It isn’t even competition for the Bronco Sport, Ford’s smaller model. That one has four-wheel drive and is off-road ready.

So, there you have it. There is no rivalry here. Ford is continuing the old traditions by making the new Bronco a fierce off-roader. Chevrolet has kept the Blazer name, but that’s all. Even when it comes to performance, the Bronco is just too far ahead for the Blazer to catch up.