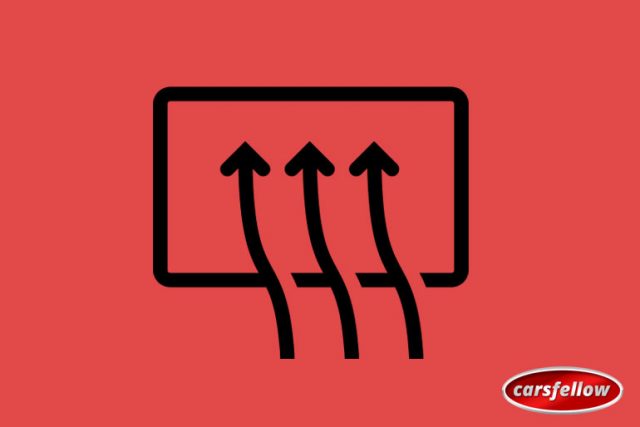 A defogger is a newly developed device that removes fog and condensation from a car’s main windscreen. This device’s primary function is to remove not only moisture but to clear the droplets of water and ice from all the glass screens in a vehicle. Defoggers are also known as “Demister” and Defroster.

In winters or monsoons, a water vapor layer appears on the windscreen and other glass. Unlike already existing mechanisms, defoggers work faster and better than the other inventions to get rid of a foggy mirror. Ac and heater installed in car cause to vent heated air in the car.

The windscreen that is on the back doesn’t come with an option of vents. Therefore it isn’t easy to spot what’s coming from there. A defogger is a system that plays its role here.

Technically these are orange horizontal lines you can see on the backside of the windscreen. These are attached to the car by an electric circuit. When the current flows, it increases the windshield temperature and makes water vaporized.

Why is Defogger Necessary in a Vehicle?

The core purpose of a defogger is to deal with the issues caused by rainwater or humidity. Rather than being victimized by these, it is workable.

The core reason for the fog to appear on the windshield is when the glass temperature is lower than the dew point. That means the temperature where the air is left with no moisture in any form. At this point, the air gets to be drenched. Here, the excess vapor is the reason to condense into the water droplets, which we call fog.

Defogger or a Defroster can be classified into two categories.

For Primary Defogger, the engine coolant of the car provides heat via heater core. Fresh air blows through the core heater and then is distributed and ducted over the interior windscreen’s surface. Mostly, this formed air is cooled down and then dehumidified by flowing it through the car’s controlling ac evaporator.

This dehumidification causes the defogging to be faster and more effective when comply with reheating. Dry and warm air has a better capacity to absorb water that is formed due to vaporization. Rather than heater only, and the cold, dry air produced by the air conditioner alone.

Although, whenever the car is provided with an air conditioning set up. It must be taken care of to retain it in a working state for primary defogger for operating it optimally. However, the ac system may not turn on at a shallow temperature to prevent it from compressor damage.

In new cars, installing this type of defogger automatically turns on the air conditioning system without further action.

Secondary defoggers are used for the backglass and side-view mirrors of the vehicle. They consist of a parallel horizontal series that are used as resistive conductors on the glass. These conductors get heat up when power is provided and remove evaporating condensation and thawing ice from the glass.

These conductors consist of a ceramic silver printed material followed onto the interior glass surface. It may also be a series of fine wires that are embedded in the glass. This printed surface is inclined to cause damage due to abrasion. But it can easily be repaired using a paint conductive material.

How Does It Work and Benefits of Defogger

This defogging involves heating the glass’s inner surface beyond the dew point via blowing hot air across that and warming it from within by supplying battery power to the resistance embedded wire. This wire is clearly visible, running linearly across the window.

Precisely, just the blowing present air can work too if the present air is dry but has still had enough room to absorb more water. That’s a juggle between humidity and relative temperature.

The car’s source of air can be picked up in most cars. Inside air can simply be recirculated and get in fresh from outside. The blower controller or the fan shows your choices as the pictures of the core source.

When you have decided to recirculate the air, but the inside air in your vehicle is vaporized. In that situation, blowing that across the windscreen can be of no use for removing fog. In these types of cases, you need to select fresh air from outside that is being dry.

Your choice is to recirculate the dry cold air drawn inside from outdoors or vaporized heated air inside. Not to be worried here; take time. Learn things gradually by trying and trying by keep practicing. To deal with the issues caused by a defogger is definitely not something we learn in high school. Just keep practicing and watch what the results are by giving it enough time to steady out.

How To Identify The Issues With TheDefogger?

It can be a sensitive matter if your vehicle’s defogger has any serious issue that has popped up on the middle of a road full of traffic.

Some problems appear with no prior notice in rainy or snowy weather, like an uninvited guest. But no need to worry, the first step to sorting any problem out is to find out what the problem is. And what is the root cause of that problem?

If heat is not coming out in the winters, that could happen to mean a more significant problem. The person inside the vehicle may be at risk of low temperature to cause antifreeze. Or there might be problems with the core heater.

If you press the defogger button and nothing seems to happen. It can be an electrical issue that could be a loose wiring or a blown fuse.

The vents may be just soiled, blocked with the soil or dirt. Dried air might cause not to have the opportunity to make that through the vents.

What Should You Do If There are any Problems?

To repair a broken windscreen defogger is not a simple task at all. It is strongly recommended to get it checked rather than trying to fix it by yourself. Most of the time, there is some disassembly that requires to happen. There might possibly be some other electrical issues present to repair.

In these types of conditions, it’s highly advised to go for professional help rather than trying to fix it by yourself.

A defogger is a newly developed device to prevent the vehicle from formed vaporization due to internal temperature or seasonal temperature.

It tends to solve the issue of clearing the back windscreen along with the side view mirrors. Though it has made it easier to drive in rainy or snowy weather, some problems often happen.

The good part is, there is nothing that comes with zero issues or cons of that. A defogger is, of course, one of those. It’s not really challenging to get rid of the problems it causes. But it is advised to seek professional help rather than trying to fix it yourself.