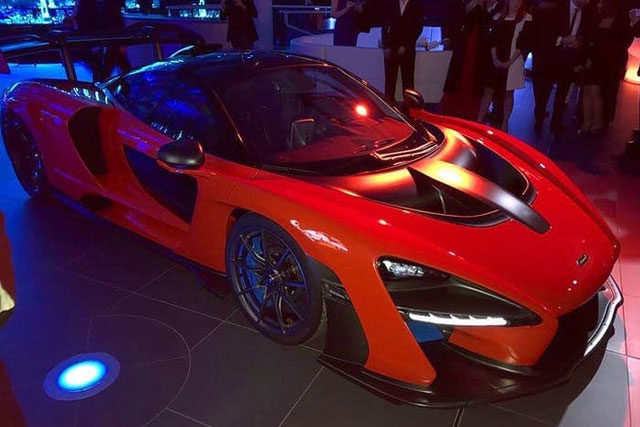 The long-awaited and recently-teased McLaren P15 hypercar has finally been revealed, but a little sooner than McLaren expected. It appears that the company hosted an early reveal party today and maybe wasn’t clear enough about how and when people could share photos from the event, since there are a whole bunch on Twitter. Or maybe McLaren’s fine with this, we’re not entirely sure.

One thing we are sure of is its name, and it’s not P15. McLaren ditched its usual alphanumeric naming scheme and simply called this car Senna, which you should know as the last name of McLaren-Honda F1 ace Ayrton Senna. Another thing we know for sure is that this car is extremely… distinct. We’re not sure whether we like it or not, but you won’t mistake its extremely long overhang, flying saucer-looking greenhouse, or the massive wing sitting far forward at the back. Other interesting design cues include the neat glass panels in the doors, and headlights that look extremely similar to those on the 720S.

The covers are off the absolutely bonkers @McLarenAuto Senna! Formerly codenamed P15, the Senna has arrived with 800PS, 800Nm, 1,198kg and 500 cars will be made for £750,000 – full release coming at 00:01 tonight UK time, and I will have a full video with my thoughts tomorrow. pic.twitter.com/HsFDIM6Hrg

The car will of course be limited production, and be extremely fast. One Twitter user noted that just 500 will be built. Each will also have 789 horsepower and 590 pound-feet of torque, and will weigh just 2,641 pounds. Additionally, it will cost just over $1,000,000.

Another user posted a press release that shows the very last one will be auctioned off to benefit the Ayrton Senna Institute charity. That car can be customized however the winning bidder likes with any standard options, while custom McLaren Special Operations (MSO) additions will be extra cost. The winning bidder will also get a replica of Ayrton Senna’s helmet signed by Bruno and Viviane Senna.