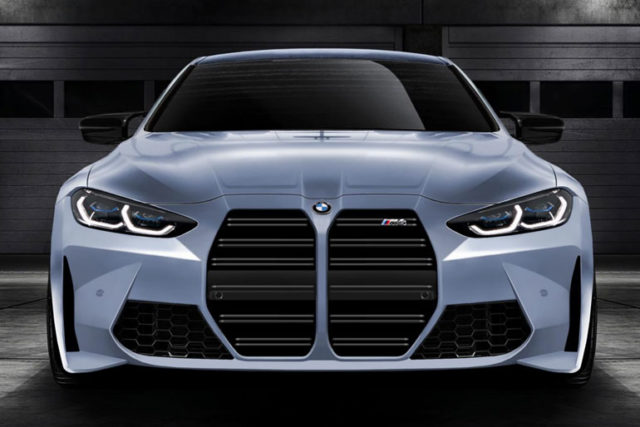 Recently, two days ago, we witnessed a few spy shots of the upcoming 2021 BMW M4 with manual transmission spotted on the web. However, all automakers must know that the manufacturer is producing the 4 Series models with a gigantic grille. The spy shots were taken recently, and trolling throughout Germany showcased a few details of the interior and exterior features.

These side glass shots of the prototype taken while it was parked confirmed that the about to launch vehicle would have a manual gearbox. According to sources, the manufacturer has also been informed that these models will have optional add-ons. However, the spy shots revealed that the manual gearbox would incorporate three pedals, which is something that sports enthusiasts would like to await. The 2020 BMW M4 is already craze is not gone and we are experiencing the next generation of M4, you can read 2020 gen review here.

Potential buyers can expect an instrument cluster of 10.25 inches and an infotainment display of 12.3 inches available as standard in the 3 Series trims. The spy shots captured a newly launched sports steering wheel along with current M1 and M2 modes. Apart from these, some reviewers also noticed illuminated seats with an “M” logo that is most visible on the M8s.

During the second week of this month, there were substantial discussions or reviews on the leaked pictures of the company’s model. These depicted no camouflage cabins. The exterior image showcased bottom inlets and an open lower portion. Aside from this, one could notice vertical holes in the fascia on either side for wheel well ventilation and brake cooling. Also, as visible from the spy images are the trim exhaust outlets, and the real pipes are noticeable on the farther end in the photos. Other features striking from the spy images include a short-sized rear deck, smooth lines, and pointy tail lights.

Another known fact about the vehicle is that it will derive its powertrain range from the pre-existing current year’s 3 Series models. Many reviewers are expecting it to arrive with the company’s S58 turbocharged 3.0-liter in-line-six engine capable of producing 480 hp or 358 kW under the standard version and 510 hp or 380 kW under the competition trim. There are also two other standard features expected from the upcoming model. Therefore, the engine is most probably going to be stronger and better than the previous year’s models.

Unfortunately, many reviewers believe that the enormous grille incorporated in the upcoming M4s will not receive the same welcome. The grill pictures were seen trolling the internet during the first week of February. The confirmation for the same came with the M4 GT3 teaser, which aired in December 2019. Among other prototype camouflages, the grille was also noticed. A few reviewers believe that these models might get a new face with the assistance of the grille and may not get the response it expects from its buyers or onlookers.

The standard model may arrive in June, as promised by the manufacturer; however, we can’t be sure of the same due to the ongoing coronavirus pandemic. Fortunately, we haven’t heard rumors about the changes in launch date or month, so far. The same is true for the M4 GT3, which is scheduled for the latter half of the current year. But given the facts, we should presume that the next year’s M4s might arrive either during the same time as the GT3 or during the following year.

Furthermore, the upcoming M4s are competing with Mercedes-AMG C63 and C43, as well as Audi RS5 and RS5 Sportback. Most likely, it will arrive in Coupe and Convertible trims at an estimated valuation of $71,000 and $79,000 in the US, respectively. As such, the EPA has not tested the vehicle to detect its highway and city mileage. We might have to wait for these to arrive. Also, according to reviewers, the space of the previously launched M4 rear seats was not as spacious as the M3; however, it was sufficient enough.

We are also expecting the upcoming standard models to come with features like WiFi hotspot and Apple CarPlay. Car enthusiasts are also hoping the vehicle will incorporate advanced driver assistance features such as automated high-beam assist, automated emergency braking as standard. Presently, the manufacturer provides limited and powertrain warranty options that are similar to rivals like Audi and Mercedes-AMG. Both of these warranties are available as standard for four years or 50,000 miles. However, it offers better complimentary scheduled maintenance than its rivals. The brand’s vehicles currently come with three years or 36,000 miles warranty. Unfortunately, BMW’s complimentary scheduled maintenance might be better than these two brands, but it is not as good as Jaguar’s.

Unfortunately, reviewers and onlookers are currently speculating on features based upon spy shots or feature reports. But we will get to know about the real engine, mileage, exterior, and interior features once the company launches the model in the market. But, as mentioned before, sports car enthusiasts should be prepared for the delay in the launch date or month due to the ongoing pandemic. However, we can expect news from the manufacturer during the scheduled period on the online platforms.

As of now, we can only confirm a few of the exterior and interior features. These include sharp lines, a massive grille, comfortable and luxurious seats, and newly launched steering wheels. We will keep you posted about new and advanced news about the upcoming M4 and M4 GT3 models, as well as the launch date scenario due to the ongoing coronavirus pandemic.