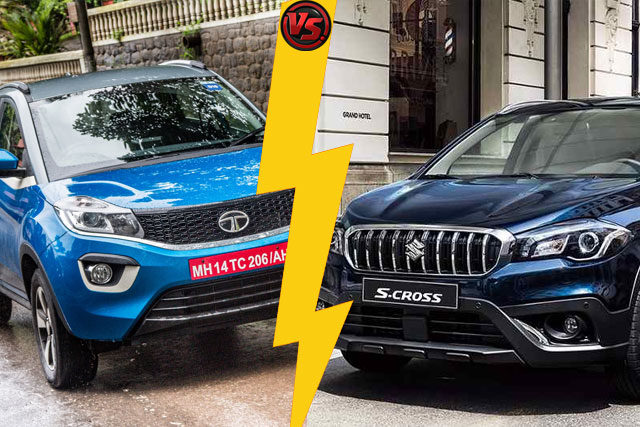 Tata Nexon is the first compact SUV from the house of Tata Motors. It flaunts a host of segment-first features and is rich in terms of design. Considering the Tata Nexon price in India and features it offer, it has been praised exceedingly well since its announcement in the mid-2017.

Maruti S-Cross 2017, on the other hand, is an already popular crossover SUV, which has gone through several updates since its launch in 2014. With the mid-life update, the 2017 version looks to be a more mature option with subtle design changes. However, it has lost its larger Fiat-sourced multi-jet 1.6-litre diesel engine.

Let’s compare both the cars according to their features and specs to determine the best one.

The Tata Nexon is built on the company’s popular Impact design platform. It features some fresh design elements to have an edge over the rivals. The front looks aggressive with a honeycomb grille along with a projector headlamp with daytime running LEDs. The side of the car looks fleshy with curves at right places to have an attractive appeal.

The face lifted Maruti Suzuki S-Cross has already tasted success in the European market. It is underpinned on the same platform as its previous variant, but has received some significant changes to look better. It carries over its crossover look, but features a newly designed vertically slatted front grille to appear aggressive. The presence of LED headlamps with DRLs adds to the aggressiveness of the car.

The interior of the Tata Nexon receives a three-tone color scheme with exterior color highlights. It features a 7-inch touchscreen infotainment system in the centre console. On the safety front, the car features dual front airbags and ABS with EBD as standard across the models.

The cabin of the Maruti S-Cross features a black finish and is more spacious than the Nexon. Three people can easily sit in the rear seat. It also offers ample boot space to carry luggage while on the go. The touchscreen infotainment system is of 8-inch. Other safety features are similar to that of Nexon.

The Indian-spec model of the Tata Nexon is available in both petrol as well as diesel variants. The diesel unit is powered by a 1.5-litre Revotorq engine that produces a maximum power output of 108 bhp and a peak torque of 260 Nm. On the other side, the petrol version features a 1.2-litre Revotron engine, which churns out a maximum power of 108 bhp against a peak torque of 170 Nm. Both engines come paired to a 6-speed manual gearbox.

The Maruti S-Cross is only available in diesel variant. It features a 1.3-litre diesel engine, which manages to develop a maximum power of 89 bhp and a peak torque of 200 Nm. The transmission duties are taken care by the 5-speed manual gearbox.

Despite being a higher priced car, the S-Cross scores lower on the performance front. Other features are more or less similar to that of the Nexon. In my views, go for the budget-friendly deal if you wish not to invest extra bucks for premiumness rather than performance.