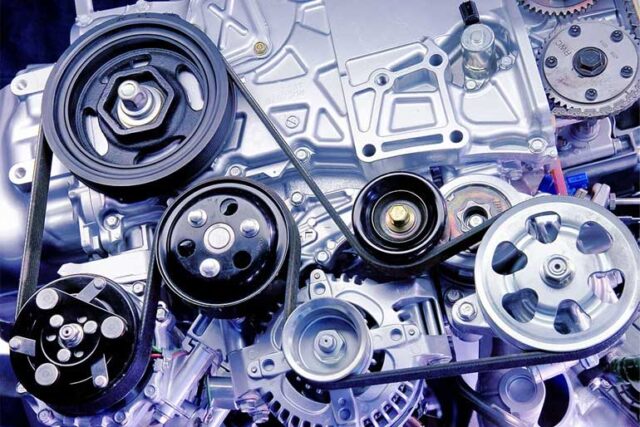 The belt is also responsible for keeping the alternator, air conditioning, and power steering pump perfect. So if the serpentine belt ever loses track, then all the components associated with it also degrade.

This article consists of all the vital information you need to know about a serpentine belt and its complexities; if you are intrigued, continue reading it.

What is Meant by Serpentine Belt?

A serpentine belt is present in the automotive engine, and it is a single yet continuous belt to drive multiple peripheral devices. The devices include an alternator, water pump, air pump, air conditioning compressor, and power steering engine.

In some vehicles, the machine makes use of two serpentine belts. The older vehicles make use of multiple belts, which were very complex and challenging to maintain. The invention of serpentine belts has solved the problem.

Fan belts or the V-belts serves the same purpose as serpentine belts. The other type of belt is a toothed timing belt, and it is the key to the overall performance of your vehicle’s engine. This type of belt is also vital to drive the water, oil pumps, and other parts.

When is The Time to Replace the Serpentine Belt?

With the advancement in rubber technology, the life of the serpentine belt has been increased. Your average serpentine belt can last an average of 60,000 to 100,000 miles. Some belts do need manual adjustment; otherwise, they may wear out quickly.

Other serpentine belts adjust them through a self-tensioning mechanism; they also need periodic servicing and proper maintenance. You should keep one thing on priority: the vehicle will stall and stop running if the belt breaks.

What Happened to the Older Serpentine Belts

As soon as the belt starts aging, it becomes slippery, squealing, and contaminated with liquid and dirt. All these abnormalities cause the misalignment of the belt. The older serpentine belt can also snap, and all the other accessories of the engine may also be lost.

Inspection of a Worn Out Belt

Suppose you want to determine the condition of your serpentine belt, then sneak it on regular intervals. You can check any visible change in the serpentine belt during an oil change and the vehicle’s annual inspection.

The regular inspection will give you the idea of changing the serpentine belt and protecting you from extra damage costs. The continuous exposure of the belt to the heat and friction is responsible for the belt’s degradation.

Indicators To Change The Serpentine Belt

Here are some of the indicators which will help you to detect that now is the time to change the serpentine belts; these are as follows:

This is one of the visible symptoms to change the serpentine belt. When the belt starts slipping, squealing, or producing sound, it’s time to replace it with a new one.

The symptoms, as mentioned earlier, are produced as a result of incorrect belt and pulley working. Antifreeze leaks and oil spillage can contribute positively to belt degradation.

If you notice any symptoms like power steering failure, sudden battery drain, and engine failure, then you need to change the serpentine belt. The serpentine belt or V-belt controls all the things as mentioned earlier.

Once the serpentine belt starts degrading, it affects the engine’s other vital components too, such as the water pump, alternator, air conditioning, power steering, and many more.

If there is any disturbance in the engine light illumination, it indicates that the belt needs to be replaced.

You should never ignore the noise produced by the vehicle. If your vehicle is producing noises, then there is always a potential problem. Go for a proper wheel alignment and thorough inspection of your vehicle.

On the complete break down of the serpentine belt, the vehicle will stall. This condition can e extraordinarily inconvenient and dangerous. Consult a certified technician for preventive maintenance of your vehicle.

Advantages of a Serpentine Belt

Here are some of the serpentine belts’ advantages, which will make its purpose clear.

After reading this article, now you can check the condition of the serpentine belt and whether there is a need to replace the belt or not.