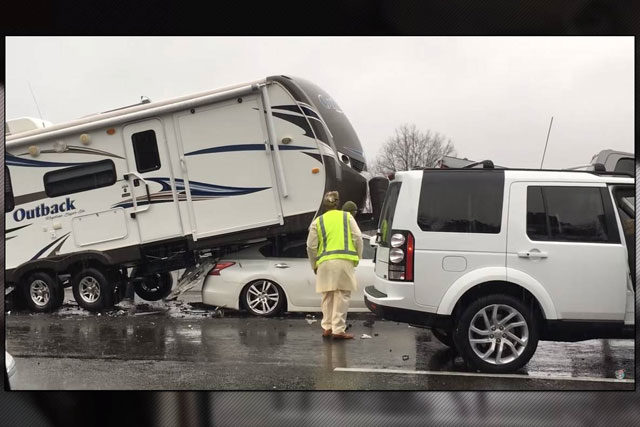 We have seen our fair share of bizarre accidents, but the vehicles and people do not stop to shock us one more time. The latest news regarding the bizarre accident involves a Nissan Altima who apparently was wedged between Ram and travel trailer.

How can this happen? I mean how a car can get underneath a trailer which is being towed by another vehicle?

It was reported on the local news that distress call was made for the help needed by the Ram which was towing the travel trailer. The brakes of the Ram were jammed, and the convoy was unable to move.

An emergency crew was dispatched as soon as the call was made. But another distress call was made by the same Ram driver who stated the bizarre situation.

When the crew reached the accidental spot, which is on the Interstate 264 in Virginia Beach, they were shocked to see that Nissan Altima was underneath the trailer in a strange way that is normally not possible.

It then came into their knowledge that the car was traveling behind them and when the ram tried to stop, the car driver who was a woman, tried to merge into the moving traffic while being on a hands-free.

She did not calculate the distance properly, maybe because she was busy on a call. Whatever the situation was when she tried to get to the other lane, the car hit the trailer in the rear end, and the trailer got lift and car moved underneath it.

According to the witnesses, there were no injuries although when the emergency crew came on the spot, the woman was still inside the car trapped.

Somehow, she managed to get back in the back seats and then exited from the back doors. It is amazing how there were no injuries which could have been many,but this still does not mean that such careless driving can be allowed. It could have ended in much worse scenarios.