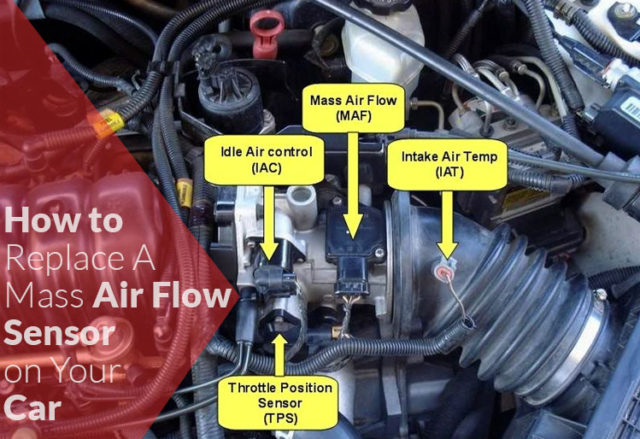 Cars with the electronic fuel system have a device called “MASS AIRFLOW SENSOR,” which gives the best information about the amount of air which should be mixed with fuel to the car’s computer.

The replacement of the MAF Sensor is followed by the performance-related issues of MAF sensors like stalling and difficulty starting.

MASS AIRFLOW SENSOR gives the feed information about the flow rate of air entering the engine. The amount of fuel is directly proportional to the amount of entered air in the tank.

This airflow information is important for the engine control unit, which regulates and delivers the accurate amount of fuel to the engine. Inside the Sensor, a hot wire anemometer is present which is heated by the car’s electrical system then this air which flows inside will make it cool again, to make it on equilibrium the car continuously delivering electrical current which maintains the temperature of the anemometer.

There are hundreds of problem which arises due to the problems in the airflow sensor initiating the poor engine performance and poor fuel economy. You will also face the hesitation and lack of power.

MAF sensor helps the engine’s computer to maintain optimal combustion. Signs which include the failure of MAF Sensor are rough idle and your car is running rich.

MAR Sensor replacement is a straightforward process with the following steps:

The best option to locate the MAF Sensor is to get helped by the owner’s manual, but generally, the airflow sensor is located between the air filters and engine.

There would be a large house that connects the air filter to the engine and there would be PVC tube-like right before the throttle body that is the housing for airflow sensor. There will also be several wires connecting to the housing.

The material needed for replacing the mass airflow sensor mainly required a new mass airflow sensor in your hand already. Generally, the sensors are of $100 to $400 in prices but you can also use a reconditioned sensor of a good quality which would be between $50 to $80. The price varies according to your car’s model, brand and trim.

Moreover, a screwdriver, a wrench, and a pair of work gloves are what you need.

On the side of the harness, a tab is connected to the connector. The connector is to be pulled on from its socket, keeping in mind that the wires will not be pulled on as they will break. This pulling of the connector from the socket could be easier by wearing rubberized gloves that produce resistance to the surface.

There would be a clamp that holds the sensor to the air filter and the intake pipe; there you’ll find the screws that fasten the sensor. Now loosen the screws, and you’ll be able to disconnect the mass airflow sensor.

But be careful during loosing the screw as the sensors have different types on the basis of their connection, some sensors use an adapter plate which then connected to the air box, that plate also required to unfasten its screw for disconnection of mass airflow.

The device has two important points; one is supposed to connect to the airbox and other to the engine. Slide the device in the intake pipe and fasten it with the clamp. Remember not to fasten it very tightly as it would be broken if handled roughly.

The next side is supposed to connect to the hose of air bow by fastening the screw or securing the plate with appropriate bolts.

Remember to be so cautious while handling the sensor as it is the delicate and most sensitive electromotive device.

You can reconnect your electrical system as the mass airflow sensor is placed correctly in place.

Reconnection starts with the slide of a female connector of harness, to the male connector of mass airflow sensor and pushes it firmly. It gives the “click” sound that confirms the connection. Now, the electrical harness is reconnected to the negative terminal of the battery. Double-check the whole system, inspect carefully. And the replacement of the mass airflow sensor is done!